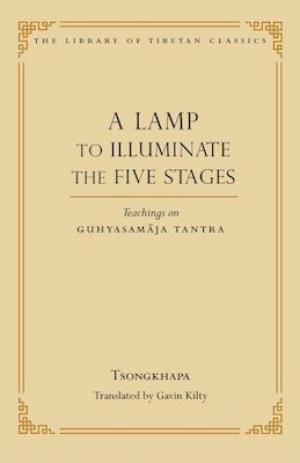 Tsongkhapa's Lamp is one of the most comprehensive and detailed presentations of the highest yoga class of Vajrayana Buddhism, especially the key practices in the advanced phase of Guyhasamaja tantra. Tsongkhapa draws extensively from Indian sources, especially the writings of Nagarjuna, Aryadeva, Candrakirti, and Naropa, to systematize this quintessential practice of Buddhist esoterism. Traditionally the work belongs to a class of "hidden texts" that are to be read only by those who have received initiations. Of the two stages of generation and completion, this volume focuses on the latter stage. In the generation stage, meditators visualize the Buddha in the form of the deity Guhyasamaja residing in a mandala palace. In the completion stage, meditators transcend ordinary consciousness and actualize the state of a buddha themselves. In tantra, this is achieved through manipulation of a subtle physiology of internal winds, or prana, and the channels they run through, and the highest realization occurs when the wind energies dissolve in the central channel at the heart chakra. For on the winds ride the consciousness, like a rider on a horse, and this dissolution initiates a dissolution of ordinary conceptuality and the dawning of the intrinsic nature of the mind, which is empty and luminous. Other topics, such as the Buddhist understanding of the process of death and dying, the intermediate state of existence, and rebirth, as well as complex theories of human psychology—such as the scope and dynamic of the emotions, dream states, and near-death experiences—are also addressed in detail in this work. This work was Tsongkhapa's last major composition, completed in 1419, the year of his death.


PRAISE
"The Guhyasamaja Tantra and its circle of texts changed the face of tantric Buddhism. Perhaps most important were their detailed descriptions of the dying process as a series of psycho-physical dissolutions that could be rehearsed by the living through advanced meditative practice. In the present volume, Gavin Kilty makes available the famously lucid presentation of these ancient techniques by Je Tsongkhapa, the founder of the Geluk school of Tibetan Buddhism. Kilty's translation is at once accurate and a pleasure to read. It represents a major contribution to our growing knowledge of this profound and beautiful tradition and will be valued by scholars and practitioners alike for many years to come."—Jacob P. Dalton, UC Berkeley, author of Tibetan Tantric Manuscripts from Dunhuang

"Another masterful translation by Gavin Kilty! The teaching of Guhyasamaja Tantra is the fundamental purpose of the Gelukpa tantric colleges, and Tsongkhapa's Lamp is the foundational guide through this most profound system. Gavin Kilty has again presented us with a most accessible, accurate rendering of this central text in lucid translation."—Jeffrey Hopkins, Emeritus Professor of Tibetan Studies, University of Virginia

"This important work, the great Tsongkhapa's final major masterpiece, brings to English readers the most authoritative account of the highest, most esoteric practice of Tibetan Buddhism. The Guhyasamaja Tantra is the "king of tantras," the model for many others. Tsongkhapa's penetrating scholarship, assessing and sorting through a huge volume of Indian and Tibetan commentary, clarifies the six-part yoga (condensed into five stages) that it is claimed can lead to buddhahood in a single lifetime. Gavin Kilty should be congratulated for having produced a highly readable translation of a very difficult and complex text."—Daniel Cozort, Dickinson College, author of Highest Yoga Tantra

"Tsongkhapa's Lamp to Illuminate the Five Stages, on the completion stage of Guhyasamaja tantra, stands as one of the greatest literary contributions to the genre of highest yoga tantra ever written. It is made all the more essential because the Guhyasamaja Tantra provides the structure for understanding all subsequent highest yoga tantras. In his translation of this extremely profound text, Gavin Kilty has successfully captured both its meaning and eloquence with such precision and grace that it will stand as the benchmark to which future translations of similar material must aspire."—David Gonsalez, translator of Source of Supreme Bliss


PRAISE FOR THE LIBRARY OF TIBETAN CLASSICS

"When completed, The Library of Tibetan Classics will represent a comprehensive reference library of the most important Tibetan classics embracing the entire spectrum of Tibetan thought and artistic traditions. Such a series will make Tibet's classical thought truly a world heritage, an intellectual and spiritual resource open to all."—His Holiness Tenzin Gyatso, the Fourteenth Dalai Lama

"The Library of Tibetan Classics brings together the essential texts of Tibetan literature. Of excellent quality and great value to scholars, the translations are accessible to nonspecialists as well, and thus should allow a wide audience to gain access to the treasures of the Tibetan tradition. A truly extraordinary accomplishment."—Georges B.J. Dreyfus, Williams College

"The editing and production are first-rate."—John R. Newman, New College of Florida

"This new series edited by Thupten Jinpa and published by Wisdom Publications is a landmark in the study of Tibetan culture in general and Tibetan Buddhism in particular. Each volume contains a lucid introduction and outstanding translations that, while aimed at the general public, will benefit those in the field of Tibetan Studies immensely as well."—Leonard van der Kuijp, Harvard University

"This is an invaluable set of translations by highly competent scholar-practitioners. The series spans the breadth of the history of Tibetan religion, providing entry to a vast culture of spiritual cultivation."—Jeffrey Hopkins, University of Virginia

"Erudite in all respects, this series is at the same time accessible and engagingly translated. As such, it belongs in all college and university libraries as well as in good public libraries. The Library of Tibetan Classics is on its way to becoming a truly extraordinary spiritual and literary accomplishment."—Janice D. Willis, Wesleyan University

"The Library of Tibetan Classics project should be among the top priorities for thinking people in our culture at this time. We stand at a kind of "end of history," in terms of our traditional, unilinear "Western" culture, which has caused us to overdevelop our abilities to control and manipulate the material elements of life, while remaining underdeveloped in our ability to control ourselves. We now urgently need to learn from the resources of all the other great cultures of our world, especially those which developed "spiritual sciences." Tibetan culture is the living matrix of the ancient Indian Buddhist culture that is no longer fully accessible elsewhere. It has been blown out of Tibet itself by the incursion of the Chinese imperium, but its living representatives have spread its positive influence to the far corners of the earth. They daily demonstrate their ability to serve the needs of humanity in these difficult times. Therefore, the systematic translation and publication of the sources from which the Tibetans themselves continue to learn even in the most difficult circumstances, is of the greatest benefit and the utmost necessity for us."—Robert A.F. Thurman, Columbia University

ABOUT THE AUTHORS
Tsongkhapa Losang Drakpa (1357–1419) is among the most influential and renowned of Tibet's sages, founder of the lineage of the Dalai Lamas and a peerless commentator on all aspects of Buddhist thought and practice. He is the author of The Great Treatise of the Stages of the Path to Enlightenment and many other works that have served as root texts for public teachings by the current Dalai Lama.

Gavin Kilty spent thirteen years (1971–84) in Dharamsala, India, studying Buddhism and learning the Tibetan language, eight of those at the Institute of Buddhist Dialectics mastering the monastic curriculum through classes and formal debate. Since then he has worked as an English teacher and as well as a Tibetan translator and translation instructor. His translations are highly regarded for being both readable and reliable. This is his third volume for the Library of Tibetan Classics.

Thupten Jinpa was trained as amonk at Ganden monastic university and holds a Ph.D. in religious studies from Cambridge University. He has been the principal English-language translator for His Holiness the Dalai Lama for more than two decades and has translated and edited numerous bestselling books by the Dalai Lama. An adjuct professor at McGill University and a scholar at the Center for Compassion and Altruism Research and Education (CCARE) at Stanford University, Jinpa is currently the president of the Institute of Tibetan Classics in Montreal.