Home » Books » Lion of Speech: the life of Mipham Rinpoche

Lion of Speech: the life of Mipham Rinpoche 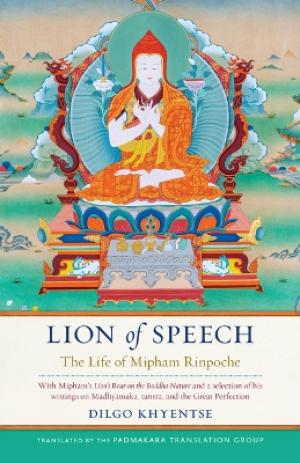 Jamgön Mipham (1846–1912) is one of the great luminaries of Tibetan Buddhism in modern times. He has had a dominant and vitalizing influence on the Nyingma school in particular and, despite spending most of his life in retreat, is one of Tibet's most prolific authors.

The first half of this volume comprises the first-ever English translation of the biography of Mipham Rinpoche written by Dilgo Khyentse Rinpoche, a teacher to His Holiness the Dalai Lama as well as an entire generation of other teachers and students throughout the Himalayan region and the West. Composed in 1939, it was left behind in Tibet in 1959 when Khyentse Rinpoche went into exile and was lost for fifty-one years before its discovery in 2010 by an extraordinary stroke of good luck. Reverential in tone, it is informed by both oral accounts preserved in notes kept by Khyentse Rinpoche's elder brother and the recollections of Mipham's devoted personal attendant of thirty-seven years.

In keeping with the identification of Mipham as an emanation of Manjushri, the lion of speech, the second half comprises a selection of Mipham's writings, designed to give the reader an experience of Mipham's eloquent speech and incisive thought. It includes both a new translation of The Lion's Roar: A Comprehensive Discourse on the Buddha-Nature and A Lamp to Dispel the Dark, a teaching of the Great Perfection, as well as excerpts from previously published translations of his works on Madhyamaka and tantra.

ABOUT THE AUTHOR
Dilgo Khyentse Rinpoche (1910–1991) was a highly accomplished meditation master, scholar, and poet, and a principal holder of the Nyingma lineage. His extraordinary depth of realization enabled him to be, for all who met him, a foundation of loving-kindness, wisdom, and compassion. A dedicated exponent of the nonsectarian Rime movement, Khyentse Rinpoche was respected by all schools of Tibetan Buddhism and taught many eminent teachers, including His Holiness the Dalai Lama. He tirelessly worked to uphold the Dharma through the publication of texts, the building of monasteries and stupas, and by offering instruction to thousands of people throughout the world. His writings in Tibetan fill twenty-five volumes.

Jamgon Mipham (1846–1912), one of the great luminaries of Tibetan Buddhism in modern times, has had a dominant and vitalizing influence on the Nyingma School and beyond. He was an important member of the Rimé, or nonsectarian movement, which did much to strengthen and preserve the entire tradition. A scholar of outstanding brilliance and versatility, his translated works are eagerly anticipated by English-language readers.